Nokia 5.1 Plus Price in India is ₹10,999: Check Specifications and Features 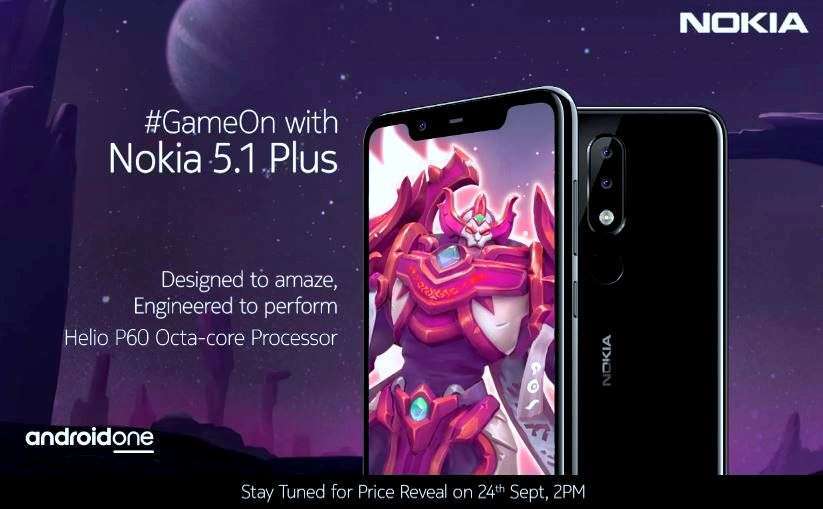 Nokia 5.1 Plus, which was launched in China as Nokia X5 got introduced in the Indian market in the last week of August. HMD Global unveiled Nokia 5.1 Plus along with another brilliant smartphone Nokia 6.1 Plus but the price of Nokia 5.1 Plus was kept a secret and has been revealed on 24th September. The Nokia 5.1 price in India was expected to cost around 10k-15k Rs. and the price is ₹10,999. Since all Nokia phones come loaded with stock Android these days, Nokia 5.1 Plus is no exception. It comes under the Android One programme of Google, which makes this phone future-ready with regular security updates directly from Google.

Nokia 5.1 Plus looks somewhat similar to Nokia 6.1 Plus as far as looks are concerned with an all-glass design. The phone Nokia 5.1 Plus feels premium with a notch design and glossy glass back. The phone is quite slippery and must be used with a soft case installed over it.
There is rear dual-Camera setup and LED flash at the back of the phone with a fingerprint sensor and logos of Nokia and Android One placed artistically. Along the top edge, there is 3.5-mm Headphone Jack and secondary noise cancellation microphone. To the right, there is the regular Power button and Volume rockers. On the left side of the phone, there is hybrid SIM-tray, which can cater either 2 SIM cards or 1 SIM card with a micro-SD card. At the bottom, there is Type-C USB port placed with primary microphone and speaker.

This phone Nokia 5.1 Plus comes with a 5.8-inch HD+ edge-to-edge display with 19:9 aspect ratio, 1520×720 resolution and 425 PPI pixel density. The display is made using 2.5D glass, which is curved at edges, thereby making the phone more comfortable to hold with single hand. Nokia 6.1 Plus is protected from Gorilla Glass 3 but Nokia 5.1 Plus doesn’t have one.

The rear camera on Nokia 5.1 Plus is a dual-Camera module with a 13MP, f/2.0 aperture primary sensor and 5MP depth sensor as the secondary sensor with LED flash. The rear camera comes loaded with Phase Detection Auto Focus (PDAF) technology, which helps to click sharper pictures automatically. The rear camera can also be used for recording videos to a maximum of 1080p @30fps. The front camera is an 8MP, f/2.2 aperture sensor, which can be used to capture sharp and crisp selfies.

Nokia 5.1 Plus comes powered with stock version Android 8.1 Oreo. This phone is a part of Android One banner from Google, which is the USP of this phone.

The phone Nokia 5.1 Plus comes bundled with Li-ion 3060 mAh battery, which is a non-removable battery. It supports 5V/2A fast charging as well.

Nokia 5.1 Plus in India is available in only one version, which is the 3GB RAM and 32GB internal storage version. Nokia 5.1 Plus price in India is ₹10,999. The phone will be available exclusively on Flipkart. Keep on checking Flipkart for more updates.