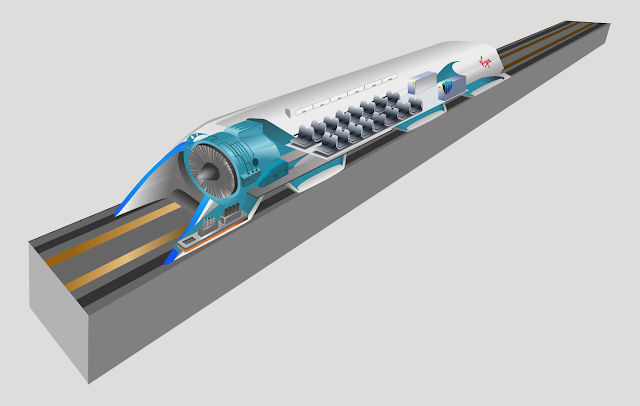 Hyperloop Transportation System, the brain-child of the Tesla Motors’ CEO and SpaceX Founder Elon Musk, is probably the most advanced of the available transportation technologies. In this, a pod-like vehicle is propelled inside a near-vacuum tube at a very high speed of around 1100 km per hour. This can easily challenge the speed of aircraft.
The Hyperloop TT System project in Andhra Pradesh is divided into three phases. Phase 1 & 2 will comprise the Commercial Hyperloop TT System between Amaravati and Vijayawada. And in Phase 3, the remaining portion of the Anantapur-Amaravati-Vijayawada-Visakhapatnam route will be constructed. Phase 2 and 3 are interchangeable and can be implemented simultaneously. Also, there is also a proposal to set-up a manufacturing complex for making tubes, capsules, track and 3D printing. The project will be completed under the Public-Private Partnership (PPP) model.

According to Bibop Gresta, their Hyperloop technology is better than the other available ones. He claims that their technology uses a combination of renewable energy to generate more electricity than it consumes. This makes the system more affordable in terms of construction and maintenance. The capsules move at very high speeds, consuming very little energy and eventually making the system highly efficient.
‘Infrastructure is not luxury, it’s the necessity!’
#Comment #Subscribe #Share
12.971598777.5945627

What is ABS in bike or car and EBD

5 thoughts on “Andhra Pradesh to get first Hyperloop Train”