Mi A2 launched: Stock Android experience with some compromise 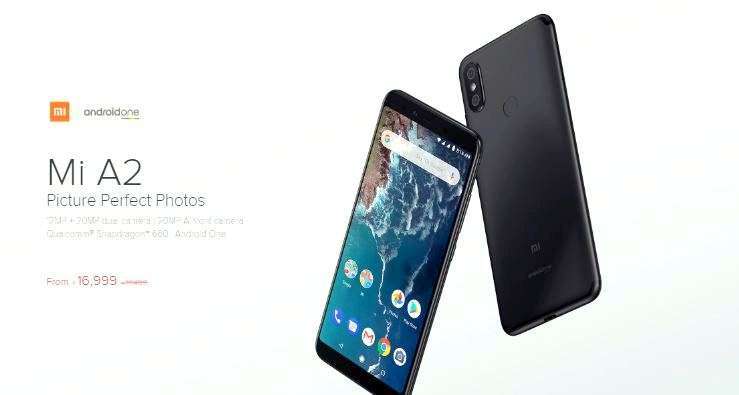 Xiaomi launched its much-awaited Mi A2 smartphone on 8th of August in India at a launch event, which thousands of people watched online. Mi A2 is a budget smartphone powered by Android One, which provides the stock Android experience without cutting much your pocket. Mi A2 is the second phone under Android One banner after Mi A1, which was launched last year. Mi A2 is expected to be a blockbuster phone for the Indian market as its predecessor Mi A1.

The phone Mi A2 had already created a buzz when it was launched globally from Madrid, Spain and will give a tough fight to phones like Nokia 7 Plus. Xiaomi which is already ruling the Indian market with phones like Redmi Note 5 Pro, this is yet another chance for Xiaomi to sustain its high growth for a longer time.
The surprise element is that there is no notch design as seen in most smartphones these days. Xiaomi is planning to launch another cheaper phone Mi A2 Lite with a notch display. There must be some marketing strategy behind this.

Read Also: Honor 9N: One more smartphone with a notch

The phone looks premium at first sight with its metal unibody design and is comfortable to hold with one hand. The phone does not look big despite its 5.99-inch display, which is bigger than the previous generation Mi A1. The phone has curved edges but the phone is quite slippery. Although, there is also one transparent case provided in the box.

There are no physical buttons provided on the bottom front bezels, only virtual buttons on the touchscreen. Lock button and volume controls are on the right side of the phone and SIM tray(4G Nano SIM+4G Nano SIM) on the left. Dual rear camera, flash and fingerprint sensor are placed at the back. Earpiece, front camera, front flash and LED notification light are placed on the top front side of the phone. Also, USB Type-C port is provided with the phone at the bottom with speakers. Xiaomi’s USP, which is IR blaster is even not left out and is provided at the top along with a secondary noise cancellation microphone. The feature that has been left out is the disappearance of 3.5mm headphone jack, but there is one connector cable provided inside the box.

The phone Mi A1 carries a Qualcomm Snapdragon 660 chipset, which is an Octa-core processor with Kyro 260 cores and is clocked at 2.2 GHz. Snapdragon 660 is a wonderful chipset with the trusted brand of Qualcomm. So, Xiaomi has not disappointed its customers as far as the processor is concerned. Also, the phone comes with Adreno 512 GPU, which is a good graphics processor.

The rear camera of this phone is a dual camera with 12 Mega Pixel and 20 Mega Pixel sensors, both having f/1.75 large apertures. Xiaomi provides its pre-installed Camera App with the phone, thereby making the camera experience better than the stock Android camera app. There is also one Manual mode available in the App, which can be used to control white balance, focus, shutter speed and ISO and many other things can be done. Also, 4K video recording can be done with Electronic Image Stabilisation.

The front camera is a 20 Mega Pixel shooter with a large f/2.2 aperture with a flash. This front camera can be used to click some awesome selfies even in low lighting conditions.

The battery provided inside the phone is 3010 mAh non-removable with a 5V/2A charging adapter. This is one point where this phone lags behind. Xiaomi must have provided at least 4000 mAh battery with a phone costing that high. Although, the phone supports Qualcomm’s Quick Charge 4+.

Most users will buy this smartphone because of its stock Android experience within affordable range under the Android One banner. The phone comes loaded with Android 8.1 Oreo out of the box. This will be upgraded to Android 9.0 Pie in the coming months.